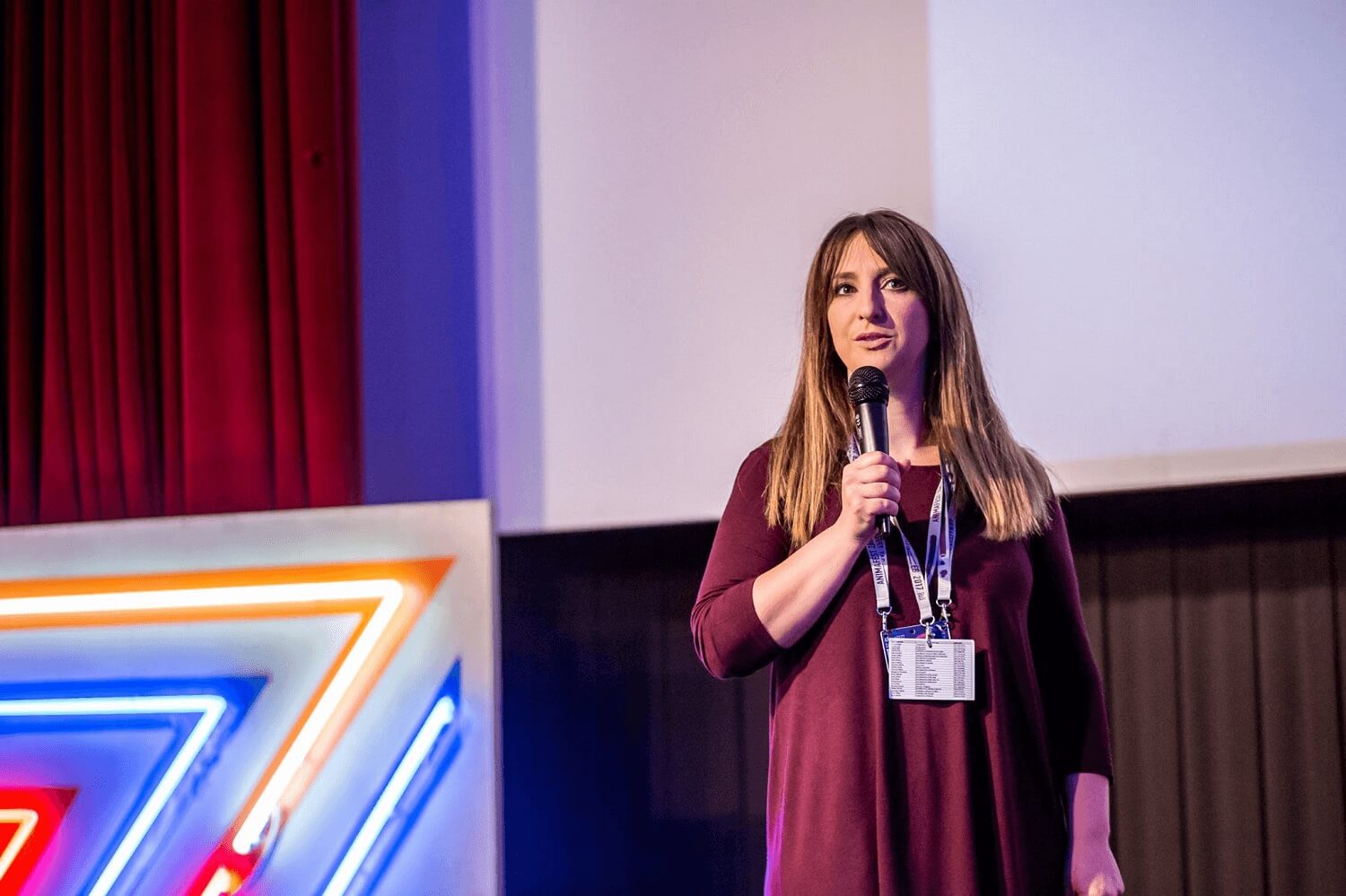 Filmmaker of the month - Matea Milić

Interview with filmmaker of the month - May 2020.

"Short film is a wondrous – and to a hyperactive like me – a favorite film form! I know that many people see the short form as a “practice run” for feature-length film, but for me, an accomplished short film is cinematic art at its finest. A good feature-length film may be able to get away with some of its less than brilliant segments throughout the film, but a short film, on the other hand, has a much smaller window of opportunity to bedazzle you with its story, its atmosphere and message."

1. How do you see short film and what does it mean to you? Why does short film matter – what are its greatest strengths and virtues?

Short film is a wondrous – and to a hyperactive like me – a favorite film form! I know that many people see the short form as a “practice run” for feature-length film, but for me, an accomplished short film is cinematic art at its finest. A good feature-length film may be able to get away with some of its less than brilliant segments throughout the film, but a short film, on the other hand, has a much smaller window of opportunity to bedazzle you with its story, its atmosphere and message. During a short-film programming slot at Animafest, which is almost as long as a feature-film screening, film-in, film-out the audience gets to experience a vast variety of techniques, ideas and styles.

Short films are an ideal format for the reduced attention spans of modern times, so it is a wonderful innovation that there are platforms such as this one that collect and curate such content. On the other hand, I would be extremely pleased if cinemas would introduce the practice of screening short films before their feature-length films because, outside the festival circuit, the audience has a very limited chance to see them anywhere on the big screen.

In addition, I like how short film is so democratic, because it is cheaper to make so it allows a greater number of authors to transform their ideas into films.

2. What is your favorite short film and why?

It is hard to single out just one short film, but these two, albeit entirely different, short films available on your platform have all the things I love about short films. These are Đuro Gavran’s documentary, The Verdict (2013), and animated short, The Tiniest (2013), directed by Tomislav Šoban.

3. You are one of the producers of the World Festival of Animated Film – Animafest Zagreb, the second oldest film festival in the world dedicated entirely to animation. The festival’s short film program contains four categories of which the Croatian Film Competition is one. Do Croatian authors submit their films to the other three categories as well and how do they fare in those?

The Croatian Film Competition was initiated in order to direct attention towards a great number of Croatian animated films that have (once again) been making headway and lining up successes on the international animation scene. In addition to this competition, in which we present about 15 to 20 films, Croatian films also compete in international categories. Each year, our main competition program – the Short Film Grand Competition, the winners of which directly qualify for the Academy Award – features titles by Croatian authors as well as minority co-productions. We are also happy that there are Croatian representatives in the other two competitive programs – the Student Film Competition and the Films for Children Competition, in which Ivana Guljašević, whose films are also available on croatian.film, is a well-known name.

Yes, they absolutely can! Croatian short animation films regularly feature in our Short Film Grand Competition, as well as in Annecy International Animated Film Festival programs, and they have also been included in Berlinale, Cannes, Sundance and numerous other film festivals’ programs.

I am especially pleased by a great number of female authors: since our Student Film Competition receives about 900 submissions from across the world, it is interesting to trace the percentage of female authors in the applications, from a higher portion of film submissions by female authors when it comes to student film, to the numbers reversing in favor of their male colleagues once they start making films professionally.

This is why I am very pleased that in the context of Croatian professional animation, there are a number of excellent female authors, such as Petra Zlonoga, Ivana Bošnjak, Martina Meštrović, Chintis Lundgren, Jelena Oroz, Irena Jukić Pranjić, Katrin Novaković, Petra Balekić, Lucija Bužančić, to name but a few who nurture their own signature styles and have garnered considerable accolades at Croatian and international festivals. In addition, new emerging female authors have begun to appear who, I am sure, will continue this tradition!

5. Due to the current COVID-19 situation, many cultural events and festivals have been postponed and a couple of weeks ago we learned that this would also be the case with the World Festival of Animated Film – Animafest Zagreb. Was it hard making this decision? Do you already have a new date in mind, and, is it even possible to plan ahead given the current situation?

It was extremely difficult to make the final decision to postpone Animafest, even though we knew we would have to do it for some time before we made the announcement. Personally, the announcement struck a chord with me and it brought on an acute case of post-festival blues – our colleagues working in festival organization will undoubtedly know the feeling – only this time, the post-festum came without all the amazing memories that we take away from every successful edition. Having to postpone the festival was unfortunate because we had already arranged jury members, completed the selection process one month before the COVID measures were introduced, we sent out the invitations to our guests, prepared much of the materials and a gorgeous new festival trailer. But, thanks to this, at least we will be able to react swiftly once the new date is in place!

It is hard to plan anything, but everyone is in the same boat, so there is no point in complaining. I think the most important thing right now is to stay positive and take care of each other – especially our team members, because it has not been easy for them to keep working in these uncertain times, as well as our colleagues from other festivals, because we are going to have to be flexible and work together if we want to achieve our goals, even at a smaller scale.

6. As we await the new dates of the festival, the Animafest team has prepared a new program – Animafest Insights. Can you tell us how you came up with this idea? What is the program all about and can we expect more initiatives like this?

As we await new festival dates, Animafest Insights was created out of a desire to connect with our audience – those who always faithfully keep track of what we do, but also those who maybe do not know what sort of films our programs have to offer. That is why Animafest’s Artistic Director Daniel Šuljić has chosen some of the most irresistibly charming films for this program ☺ These are festival favorites from previous years, which have won major awards both at Animafest and abroad. One of the highlights of every festival is that it brings together the audience and the authors, so, since we normally host countless guests from across the world, each film in Insights is accompanied by an interview with the author so that the audience can get to know them and hear more about their work. What seems like a relatively simple format actually involves a lot of work done by our small team, headed by Danijel as the program curator, who selects the films and conducts the interviews with the authors. The team consists of our long-time associate Lea Mileta as editor, my production colleague Paola Orlić, who handles the transcripts and translations and in record time managed to persuade even the shiest of directors to do the interviews. The team also includes our website and technical matters expert Davor Srića and Ornela Čop, our social networks guru, who also has impeccable taste, which is why it is a pleasure to follow Animafest Insights on our Facebook and Instagram pages. Make sure to check them out!

We are very grateful to everyone who has devoted us their valuable time and to all those who have “unlocked” the passcodes of their treasure-troves and shared their animated treasures with us.

7. How important is culture at a time when we are encouraged to stay at home? There is an increasing number of online platforms and your own Animafest Insights takes place online. Do you think this is a good solution to the problem we currently face? Do you think measures and guidelines should be introduced to start having cultural events in cinemas, theaters, etc. again?

I think even the people who did not consume a lot of cultural content before this now realize what life would be like if, during isolation, there were no music to uplift us or a film or a TV series to gather around in the evening, if there were not any excellent theater plays that we have had a chance to watch on our computers, imagining we were actually at the theater. Different online initiatives are a reflection of the desire and the necessity to offer the audience cultural content even under these circumstances. Even though nothing can replace an actual screening on the big screen and the atmosphere at the theater or a concert, all of this is very valuable. I hope that the audience who currently have massive libraries of quality content at their disposal for free will be willing to start paying for it once again when the circumstances change, because the costs of production of cultural contents are indeed very high.