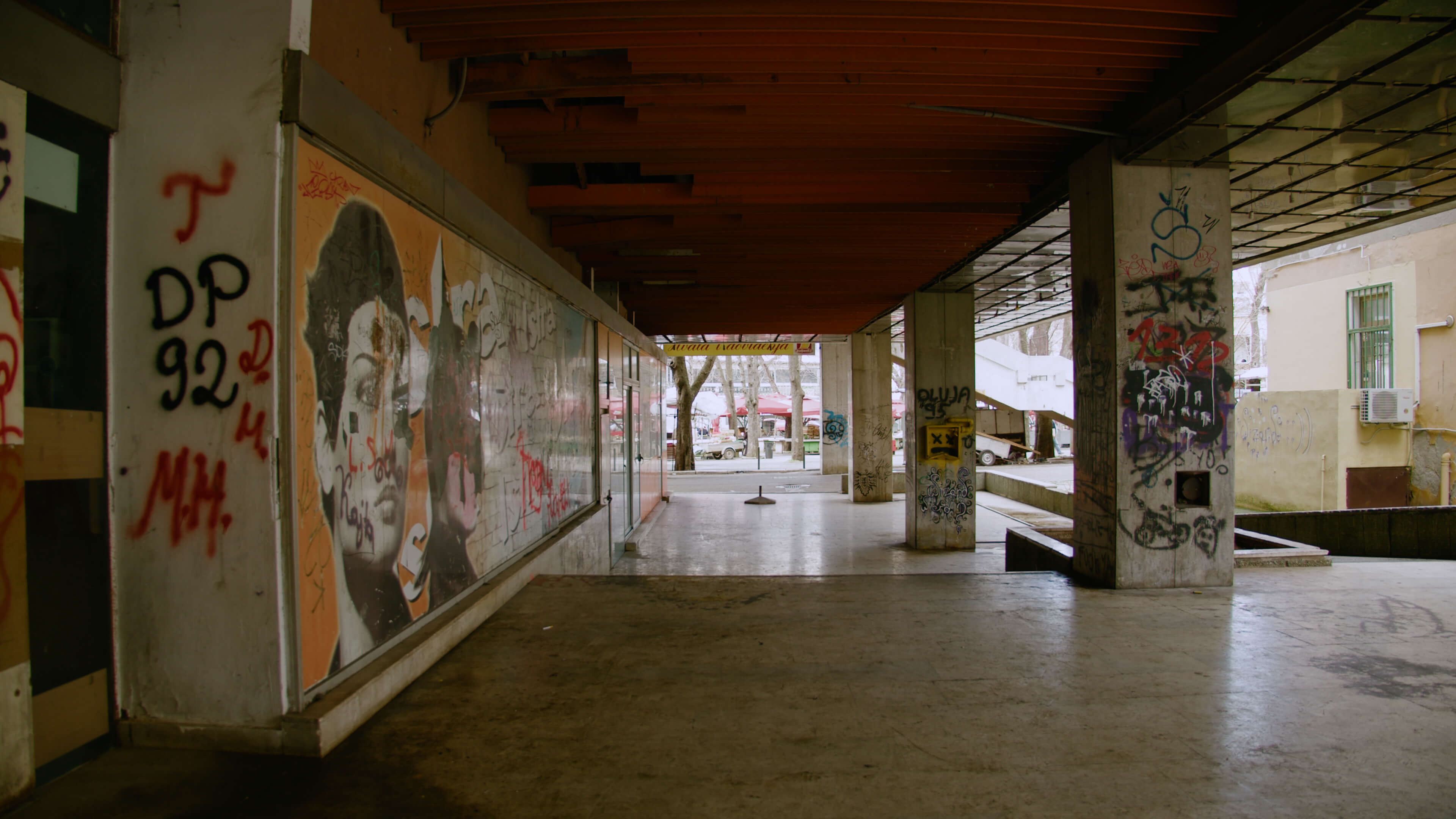 Filmologists David Bordwell, Janet Staiger and Kristin Thompson once postulated that there are at least two narrative strands in classical Hollywood film that bind a single group of characters, of which one almost invariably includes a heterosexual romance. Analyzing a sample of 100 films made between 1915 and 1960, they determined that in as many as 95 percent of the cases, love was one of the most prominent themes, while in 85 percent, romance was an integral part of the main narrative. Would this statistic still hold true if we were to test it on today’s cinema (or streaming) repertoire? What about the croatian.film platform? Given that romantic love holds such a central position in our collective imagination, from the so-called pulp fiction to high art, despite some fluctuation, there does not seem to be any drastic change. Incidentally, Sara Grgurić’s Forest, last year’s Checkers program winner, deals precisely with love in the age of Covid-19, which short film fans can watch here on the platform.

The popularity of the romantic plot is not at all surprising given its versatility and practicality in terms of narrative, especially for creating conflict. Cinematic romances likewise offer an escape from reality, but at the same time become a means of coming to grips with it. Love stories allow us to battle our basest passions and celebrate the noblest of our impulses. Moreover, as one of the primary mechanisms of socialization, love often lies at the very heart of the stories about growing up, in which the protagonists learn to deal with the various challenges of approaching adulthood as well as construct their identity, through the experience of first love. Juraj Lerotić’s short, Then I See Tanja, is just such a coming-of-age drama, about Željko, a teenager living alone with his younger brother because their mother is in hospital getting cancer treatment. Skillfully manipulating cinematic language, Lerotić draws the viewer’s attention to the artificiality of the cinematic medium, while also, somewhat paradoxically, producing the powerful impact of emotional authenticity. Told in still photographs and driven by the main character’s narration, the film portrays the crucial period in Željko’s rite of passage to maturity by way of two loves – a romantic one, towards a girl his age, Tanja, and the other platonic one, towards his mother and brother. Love is here portrayed precisely as a mechanism of socialization. That is, in the desire to find the nerve to approach Tanja, Željko resorts to a self-help guide on meeting people and body language trying to build up his self-confidence and learn the basics of human interaction. He also gets a job so he could buy his mom a wig.

Love-struck protagonists wander aimlessly through every possible film genre, from romantic comedies and dramas, to thrillers, horror and action movies – as a narrative motif, love can be smuggled into any story anytime. However, despite our obsession with the topic, few genres are as disparaged and as celebrated as romantic film. Of course, with the blurring of boundaries between “high” and “low” culture and their intermingling, there has been some democratization in the area of romantic film as well. There are college courses and academic texts analyzing romantic comedies such as Bridget Jones's Diary, while critics get excited about film and TV romances such as Normal People, an adaptation of the novel by Sally Rooney. Yet not without controversy and resistance. Take, for instance, writer Will Self’s lament on today’s state of affairs in the world of literature (and the tastes of the hateful millennials), in which he protested against the popularity of Sally Rooney with almost as much pathos as Mark Twain when he expressed his histrionic animosity towards Jane Austen.

Escapist romance is still more or less relegated to a guilty pleasure. To claim its artistic legitimacy, a love story needs something more – it is expected to rise above its baseness and become a catalyst for addressing the more elevated topics and issues about the society we live in and our humanity. On the other hand, the easy-listening format of romance offers a welcome respite from the efforts to make commercially viable films for mass audiences that offer up controversial or “unglamorous” social issues and try to raise awareness about harmful social conventions. Stanley Cavell, thus, wrote about the comedies of remarriage, which, portraying a battle of the sexes, problematized the institution of marriage and the position of women in society, while centring on stubborn female heroines who strived for equality and emancipation. In such films, the conflict, of course, would always be resolved to the satisfaction of both parties, allowing these comedies to address current issues in a benign enough manner. In the case of Bridget Jones, the subversion consisted in the very choice of the main protagonist who does not fit into the proscribed Hollywood beauty standards. Eleanor Bergstein, the screenwriter of Dirty Dancing, wove the subplot about abortion into the story about a summer romance so cleverly that the producers could not remove it unless they intervened into the central plot.

Subversion sometimes lies in the inversion of the very conventions of a happy ending. Irene Jukić Pranjić’s animated film Gamer Girl takes precisely this final resolution and the promised ‘happily ever after’ as its starting point. The film follows the central female protagonist from the moment she gets married to her utter psychological and physical breakdown caused by the burden of her daily commitments. The film’s narrative structure and visual aesthetic mimic a video game in which the protagonist’s world is extraordinarily bounded by and shaped according to the strict rules and tasks she must fulfil. The space within which she moves is flat, while her freedom of movement is radically limited. She is only able to move left-right and up-down, the goal being to successfully complete all of her task and reach the end of the day, while fulfilling the demand for an active sexual life is particularly important. Meanwhile, the man is reduced to a background character whose only function is to measure the protagonist’s ability to maintain a “successful” marriage.

A romance without romance or the struggle for power

With time, the romantic narrative expanded, infiltrating even the relationships that were technically non-romantic. The romantic comedy, often segregated into the niche of a “women’s genre,” drew the attention of the heterosexual male, bringing about the beloved genre of bromance. Though bromances are not exclusively comedies (it is interesting that one of the most popular films on the genre is the action drama, Point Break, directed by a female director – Kathryn Bigelow), they employ satire based on brazenness, the ridicule and disrespect of social norms, and vulgar humor with the purpose of re-examining the codes within which the imposed and dominant form of manhood is performed. The debate on the sincerity of this intent is still ongoing, which raises the question whether such comedies are indeed subversive or whether they simply perpetuate and additionally normalize harmful norms and modes of behavior.

Jakov Nola’s Counter-offensive distills this relationship to its barest gender determinants, while humor is almost completely removed from the equation. He places two friends, Josip and Roko, inside Josip’s small student apartment, while, behind the closed doors of her room, Josip’s roommate frolics with her latest lover. Josip’s bout of jealousy, further stoked by Roko’s comments, prompts an outburst of (less than) repressed misogyny, self-destruction and other toxic staples of warped visions of manhood. It is indicative that the object of lust, who is Josip’s roommate, is physically absent throughout. Her presence is constructed and hinted only by means of the male protagonists’ words and gaze.

Structurally very similar, but told in a much more laidback, satirical tone is Smart Girls, directed by Hana Jušić and Sonja Tarokić – a gender inversion of Nola’s bromance of sorts. The film likewise takes place inside an apartment, as two friends, Marija and Nikolina, plan Nikolina’s loss of virginity, so that her hypothetical future husband is not disappointed by her lack of experience. Like Counter-offensive, Smart Girls also deals with the perception and performance of gender roles, while this perception is fully filtered through the interpretation and acceptance of conventions of romantic love, or, male-female relationships. The girls perform the preparations for the anticipated night as if they were a ritual, marking the moment of Nikolina’s final transition into womanhood. While the non-actualization of the romance in Counter-offensive triggers a loss of control, whereby Josip resorts to an aggressive and exaggerated performance of manhood in order to mask his helplessness, in Smart Girls, the absence of romance in the disappointing sexual act empowers the protagonist to take her life into her own hands and assume a position of superiority with regard to her humiliating experience and its male protagonist.